The Mobile Family Library visits Braddan every other  Wednesday and stops at the following locations:-

10.00 Outside the Commissioners Office

It’s such a great resource that some of the Commissioners’ members of staff have recently become members. It carries a large selection of books and you can order books and audio books from their computer catalogue of over 36,000 items.

Local authority general byelaws are made by a local authority under the powers of section 28 of the Local Government Act 1985. However, under Tynwald standing orders the Minister for Infrastructure has responsibility for reporting to Tynwald on the Byelaws. These byelaws are designed to deal with matters affecting a local community and the Minister for Infrastructure is primarily to facilitate the referral of the local authority byelaws to this honourable Court for approval.

The byelaws are intended to regulate various activities and are aimed at preventing and suppressing nuisances or minor acts of anti – social behaviour within the parish district of Braddan. This general power is subject to the proviso that the subject matter of the byelaws must not already be covered by other legislation and that the byelaws must be approved by Tynwald.

The byelaws have been subject to extensive consultation within the community of Braddan and have been formally approved by Braddan Parish Commissioners.

Concerns were raised about the byelaws being draconian but many of the byelaws include a proviso which means that the byelaw will only apply if the activity the person is involved in creates a danger or nuisance or annoyance to other persons.  In addition, local authorities need to demonstrate that, where applicable, the byelaws are designed to deal with genuine problems in their district.

People have been concerned about overzealous enforcement of the byelaws. Although enforcement of the bylaws can be undertaken by police officers, or by an authorised officer of the local authority, it is a directive from the Commissioners that considerable discretion be exercised when enforcing the byelaws. A verbal or a written warning may be all that is required, especially if juveniles are involved, and any action through the Courts is only likely to be considered if all other options have proved unsuccessful.

The wording of the general byelaws will be uniform as this will help ensure continuity across the Island, but it is up to each individual local authority to decide which of the model bylaws they wish to adopt. It is likely therefore, that any general byelaws which are made by a parish authority will not contain as many provisions as those from a larger local authority district.

Braddan has an important role to play in developing recreational and sporting facilities in their district and the Commissioners have been proactive in recent times and have built major new developments in recent years such as the urban skate park and BMX track in Grianagh Park.

The new general byelaws will replace similar general byelaws which were made in 1991 and which ceased to have effect in 2011.  Many of the provisions in the 1991 byelaws have been reproduced in the new 2014 byelaws.

The byelaws were approved by Tynwald on 17th July 2014 and come into operation on 1st August 2014.

A copy of the byelaws can be found below.

This advert appeared in the Courier and the Examiner last week. Please note that the closing date for responses is Friday 11 July 2014. For more information please contact the Clerk. 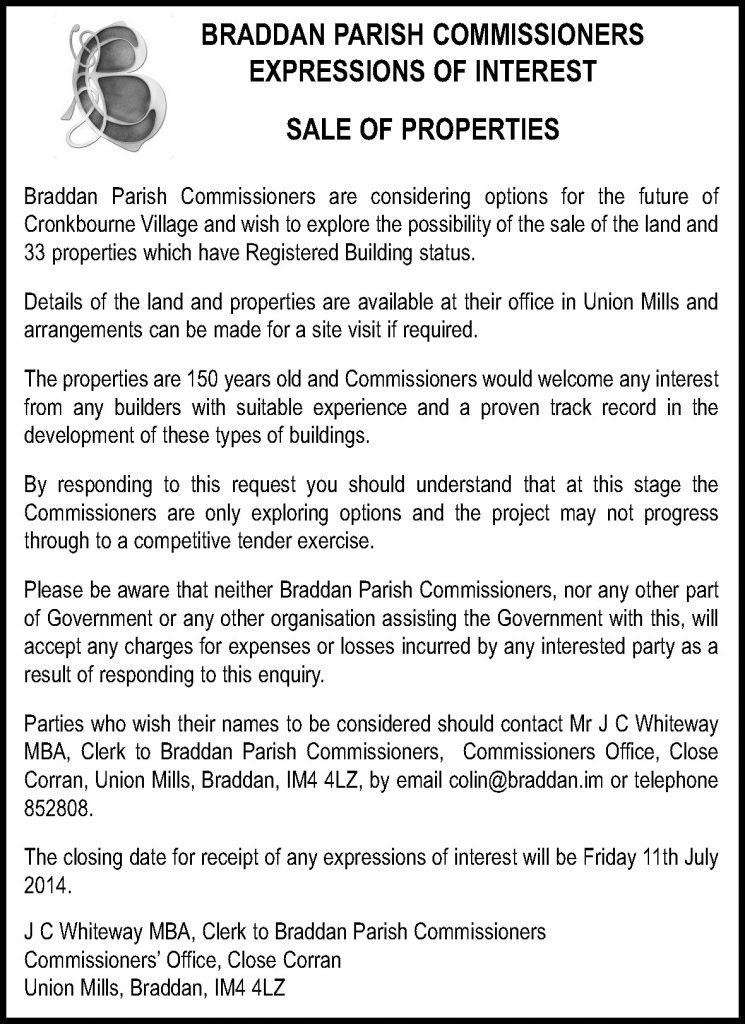 Reduce the amount of waste you throw away and improve your garden at the same time!! Eden Park, in conjunction with the Isle of Man Government currently have a special offer on compost bins. Contact Eden Park for more details.

The Commissioners are delighted to advise all its ratepayers that the legal action against the Authority, that commenced in June 2009, by their former clerk Charles Lewin has finally reached a conclusion, subject to any appeal, as the case was struck out by Deemster Christie in the …High Courts on Thursday 6th February.

Mr Lewin, who was dismissed for gross misconduct in 2007, sought damages for wrongful dismissal and loss of his pension rights to a value, he claimed, to be in excess of £1million.

Whilst Mr Lewin had always claimed that the damages he was seeking were considerable, he did not produce anything to the Courts to substantiate that claim.

Unfortunately for the ratepayers the legal costs of this case have exceeded £250,000, however the Authority was left with no choice but to defend the action because of his unjustified substantial claim, a stance that was supported with a legal opinion from Mr Philip Coppel QC.

They now intend to try and recover these costs from Mr Lewin as well as a substantial sum of money that they have lodged as a counter claim to Mr Lewin’s action.

The Commissioners wished to record their grateful thanks to their legal team, and all their staff who have endured a great deal of pressure and stress over these past 4 1/2 years as the matter slowly ground its way through the Court system.

They are encouraged that the unjustified actions of Mr Lewin have reached the correct conclusion and this now allows them to press on with their everyday work and development plans without the unwarranted time and financial restrictions caused by this failed litigation.

The Authority hope that its ratepayers will now understand that the removal of this liability played a part in the Authority’s 6p rate reduction announced last week.

The lengthy judgement is available shortly on the IOM Courts website; see links below:-