For full details of the Manx National Rally together with road closures from 10 May 2019, please see the link below:- 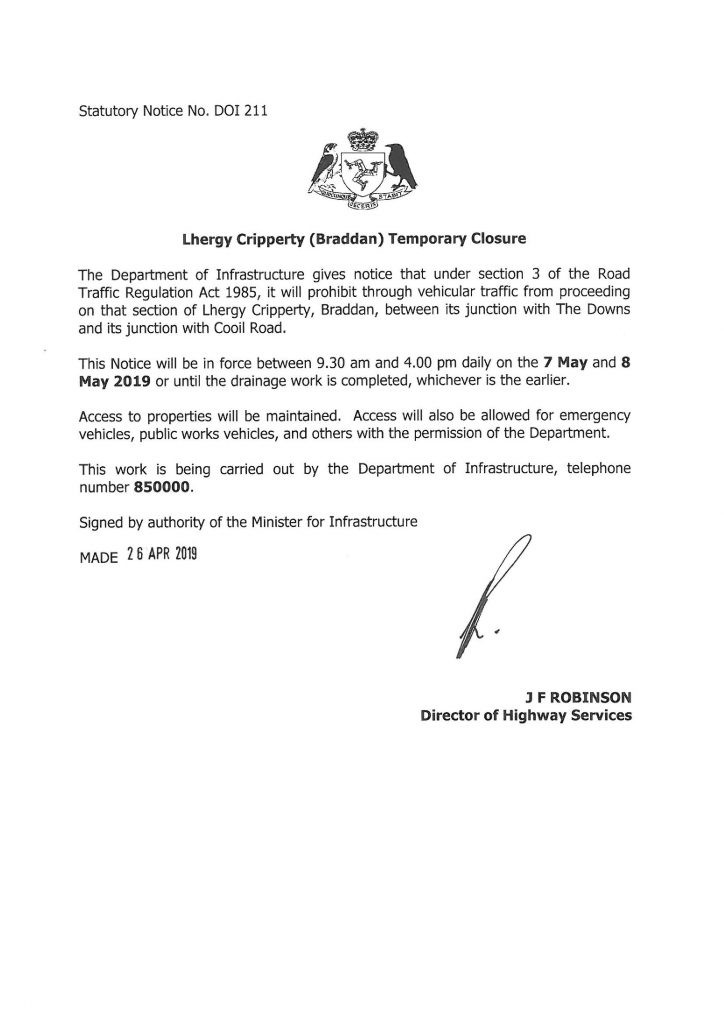 There will be a Middle Constituency Surgery at the Memorial Hall, Main Road, Union Mills on Saturday 30th March 2019 from 10am to 12 noon.

MHKs Howard Quayle and Bill Shimmins will be there along with Braddan Commissioners. Please feel free to come along to raise any issues you have. No appointments are required.

Braddan Commissioners’ Rate set at 201p in the pound

Braddan Commissioners wish to advise that at a meeting held on 24 January 2019, they set their Parish Rate at 201p in the pound, which represents a 0.5% increase on the previous year.

The Commissioners have ambitious plans for the year ahead which they believe they can achieve with the rate income for the coming year and with the aid of some money that has been underspent in the current year.

The Commissioners will announce the details of the schemes as soon as they have been firmed up, but they include schemes for their recreation areas in Clybane, Snugborough and Cronk Grianagh Park and also enhancement of their work of keeping the Parish clean and tidy and promoting more recycling. 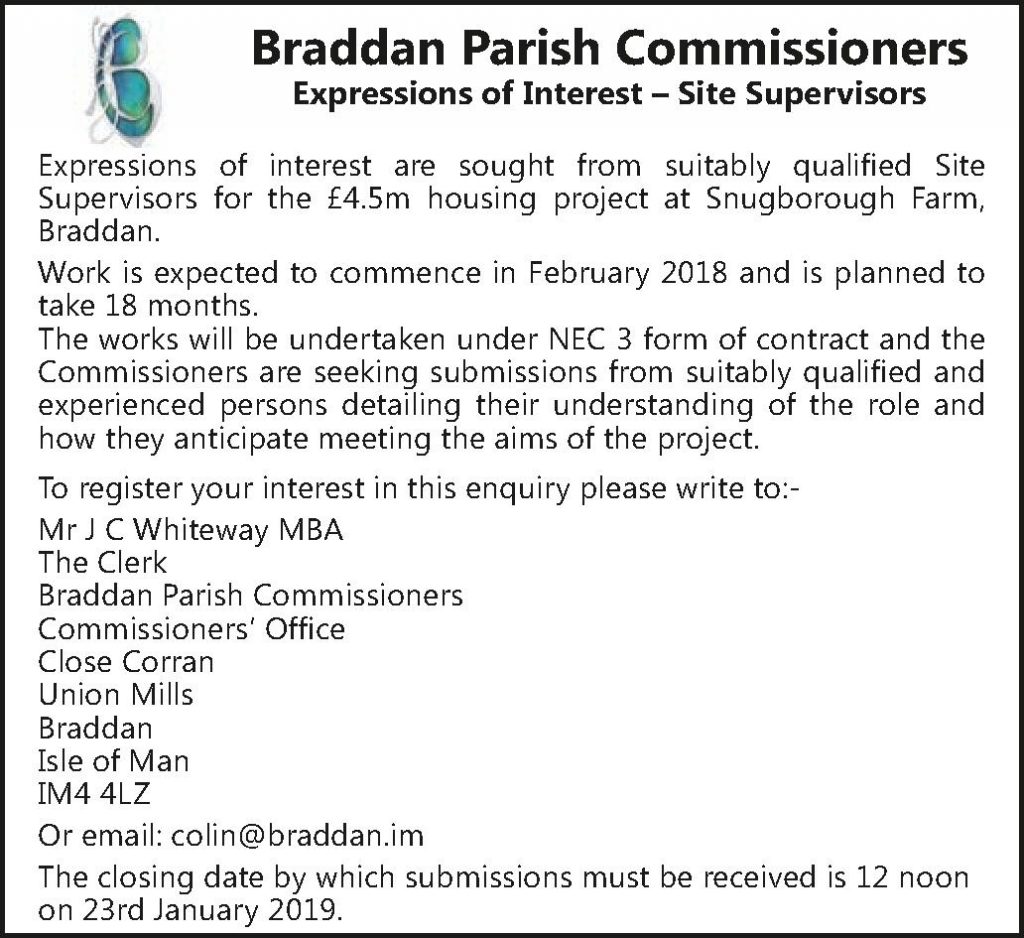 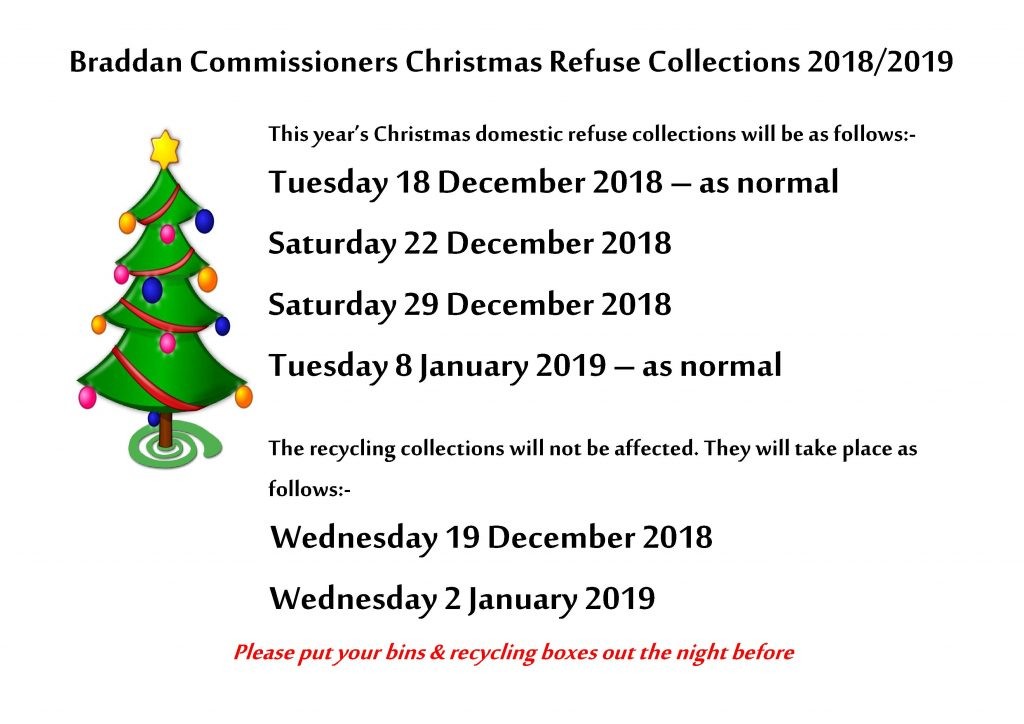 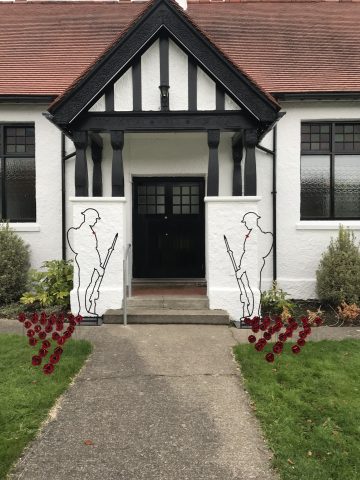 Braddan Commissioners are holding a Secular Act of Remembrance on Sunday 11 November at 10.45am at the Memorial Hall in Union Mills.

The Two Minute Silence will be observed at 11am.

The Commissioners’ Chairman Mr Andrew Jessopp said “All are welcome to attend the event. Representatives from the Isle of Man Freethinkers will conduct a short ceremony of Remembrance. Light refreshments will be served afterwards.”

Braddan Commissioners have erected two silhouettes of WW1 soldiers in front of the Memorial Hall, together with 60 metal poppies; one to represent each of the 60 men from the Parish of Braddan who perished in the First and Second World Wars.

The setting of the Memorial Hall is particularly poignant as the Hall, which was built in 1903, has a brass plaque mounted above the entrance with the crest of the West Riding Regiment and the following inscription:-

“To the Beloved Memory

Who was killed in action at Boesinche near Ypres

Only son of the Speaker of the House of Keys

And great grandson of James Dalrymple

This tablet was erected by residents in Union Mills

“A noble manly life is ended”.”

Details of the next Vintage Sale are now available:- 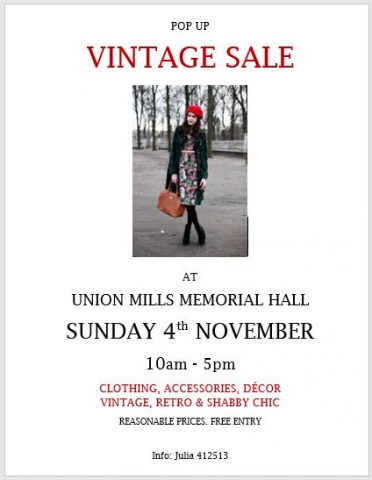 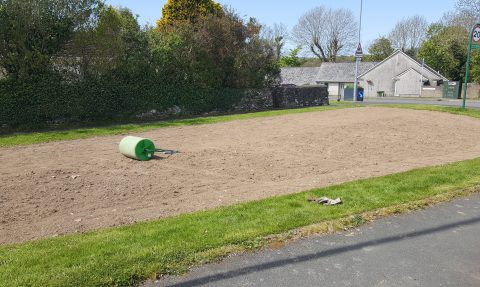 Braddan Commissioners experimented this year with planting an area with wild flower seed on a verge next to the Strang crossroads. After preparing the ground, the planting of the annual seed mix last spring, coincided with driest summer for years and they struggled initially.

Fortunately, the rain returned later in the summer and the flowers have since thrived.

Commissioners’ Chairman, Andrew Jessopp said “This is the first time the Authority have planted wild flower seed and we have been delighted with the results and huge amount of positive feedback from members of the public. The prominent nature of the site has meant the flowers have been a talking point all summer and are still in bloom now. The project is not just about enhancing the area, hopefully we have also attracted lots of insects and pollinators.”

The next stage will be to mow the whole area and prepare the ground again ready for planting next spring. Due to the success of the project, the Authority are going to extend it to another area in 2019 in the Isle of Man Business Park. The new location was chosen due to its proximity to offices and businesses and the Commissioners hope it will be as successful as the Strang.

The seed was obtained from Pictorial Meadows, a company part owned by the University of Sheffield, specialising in the development of wild flowers that thrive in garden soils.

The latest audited accounts for the year ended 31 March 2018 are now available to view here.